Yanis Varoufakis and 'Agitating' for a "Democratic European Union" 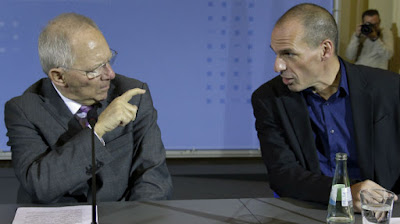 From:  The WORLD Weekly Interview:

"Since stepping down as Greece’s finance minister in the leftist Syriza government, Yanis Varoufakis has been touring the world with his words, giving speeches to packed-out audiences. He spends much of the year with his wife Danae Stratou on Aegina, an island near Athens. From there, the couple can no doubt see that his work is a long way from being realised. Greece is still ensnared by crisis. But his main political focus now is ‘agitating’ for a “democratic European Union”.

"Born in Athens in 1961, Yanis Varoufakis was six years old when the Greek state was seized by a military coup d’etat led by the fascist Georgios Papadopoulos. “Those bleak days remain with me,” he would later reflect on his blog. “They endowed me with a sense of what it means to be both unfree and, at once, convinced that the possibilities for progress and improvement are endless.”
"By the time the dictatorship collapsed, the young Yanis was reaching the end of his secondary education. His parents, George and Eleni Varoufakis, began to consider where he should go to university. Eventually, they decided it was still too dangerous in Greece so they opted to send him to the University of Essex in the United Kingdom. There Yanis Varoufakis would study economics – which he saw as the “lingua franca of political discourse” – and join the Communist Society as he became politically active."
"Earlier in his life, Dr. Varoufakis was a much more orthodox Marxist, but his thinking has evolved over the years. “The exuberance of youth often goes together with dogmas,” Dr. Varoufakis told Aaron Bastani at Novara Media. “I believed a lot more in central planning than I do now. I believed a lot more in the wisdom of a political party that is hierarchically created. I was less aware and sensitive to the capacity of humans to abuse power – even power that is created in the pursuit of good causes.”
"Today, Dr. Varoufakis characterises his own brand of Marxism as “erratic” and libertarian. It draws on the humanistic work in Marx’s early career. As Dr. Varoufakis explains to The World Weekly: “Marx’s quarrel with capitalism was not that it was unjust but that it was inimical to human freedom and particularly inefficient at pressing our magnificent capacity for technological innovation into humanity’s service”.
"He goes on to say: “He got capitalism right but failed to predict how his disciples, the left, would exploit the power of his ideas to build political power structures that proved detrimental to human freedom and particularly inept at harnessing technological innovation”. Much like the British economist Paul Mason, the former Greek finance minister seems to view technology as a force that will overthrow capitalism with or with the help of the left. The question that occupies his thinking is not whether capitalism will be overtaken by technology but what kind of society will emerge as a result. Will it be the good society that has so far eluded us or some dystopia?".....

For more of this article please see:
http://yanisvaroufakis.eu/2015/11/21/world-weekly-interviewv/#respond