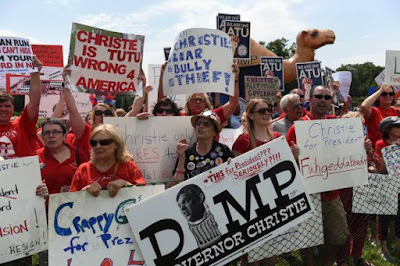 Kudos to my friend and colleague: Dina Scacchetti and her husband, Tom Beatini!

(edit) "Tom Beatini and his wife, Dina Scacchetti, of Hillsdale are retired teachers with a combined 67 years in the pension fund. But while they are concerned about their retirement, they said the bigger issue is the governor’s stances on public education — promoting charter schools, slashing school funding, and the installation of a 2 percent cap on budget increases and a salary cap for superintendents. “We’re all going to be paying for it for years to come,” Beatini said. (edit) See complete article
at June 30, 2015

Want to help bail out Greece yourself?

Do you want to help bail out Greece yourself? http://
tinyurl.com/nfppcvr 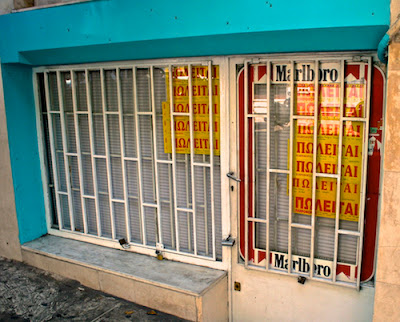 As it happened- Yanis Varoufakis' intervention during the 27th June 2015
Posted on June 28, 2015 by yanisv at LINK

"The Eurogroup Meeting of 27th June 2015 will not go down as a proud moment in Europe’s history. Ministers turned down the Greek government’s request that the
Greek people should be granted a single week during which to deliver a Yes or No answer to the institutions’ proposals – proposals crucial for Greece’s future in the Eurozone. The very idea that a government would consult its people on a problematic proposal put to it by the institutions was treated with incomprehension and often with disdain bordering on contempt. I was even asked: “How do you expect common
people to understand such complex issues?”. Indeed, democracy did not have a
good day in yesterday’s Eurogroup meeting! But nor did European institutions.
After our request was rejected, the Eurogroup President broke with the convention
of unanimity (issuing a statement without my consent) and even took the dubious
decision to convene a follow up meeting without the Greek minister, ostensibly to
discuss the “next steps”.

"Can democracy and a monetary union coexist? Or must one give way? This is the pivotal question that the Eurogroup has decided to answer by placing democracy in the too-hard basket. So far, one hopes.

"Colleagues,
"In our last meeting (25th June) the institutions tabled their final offer to the Greek
authorities, in response to our proposal for a Staff Level Agreement (SLA) as
tabled on 22nd June (and signed by Prime Minister Tsipras). After long, careful
examination, our government decided that, unfortunately, the institutions’
proposal could not be accepted. In view of how close we have come to the 30th June
deadline, the date when the current loan agreement expires, this impasse of
grave concern to us all and its causes must be thoroughly examined.

"We rejected the institutions’ 25th June proposals because of a variety of
powerful reasons. The first reason is the combination of austerity and social
injustice they would impose upon a population devastated already by…
austerity and social injustice. Even our own SLA proposal (22nd June)
is austerian, in a bid to placate the institutions and thus come closer to
an agreement. Only our SLA attempted to shift the burden of this
renewed austerian onslaught to those more able to afford it – e.g.
by concentrating on increasing employer contributions to pension
funds rather than on reducing the lowest of pensions. Nonetheless,
even our SLA contains many parts that Greek society rejects.

"So, having pushed us hard to accept substantial new austerity, i
n the form of absurdly large primary surpluses (3.5% of GDP
over the medium term, albeit somewhat lower than the
unfathomable number agreed to by previous Greek
governments – i.e. 4.5%), we ended up having to make
recessionary trade-offs between, on the one hand, higher t
axes/charges in an economy where those who pay their dues
pay through the nose and, on the other, reductions in
pensions/benefits in a society already devastated by
massive cuts in basic income support for the multiplying
needy...."  (edit)

Joseph Stiglitz on how the Greek people should vote

Joseph Stiglitz writes at The Guardian on how Greek people should vote:
http://tinyurl.com/porjduk
Courage, wisdom and fortitude to the people of Greece! 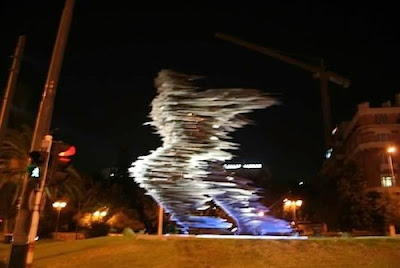 Greece is going but where?

I took this photograph standing at the edge of Lake George in the Adirondacks this week.
It is called: "Standing" 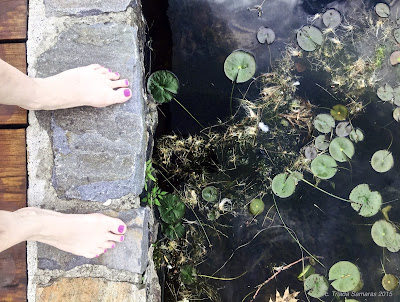 A Must Read! Varoufakis on Greece Proposals to End the Greece Crisis

This is a must read!:

"The only antidote to propaganda and malicious ‘leaks’ is transparency. After so much disinformation on my presentation at the Eurogroup of the Greek government’s position, the only response is to post the precise words uttered within. Read them and judge for yourselves whether the Greek government’s proposals constitute a basis for agreement."
(YV)

(edit)..."Structural reforms promote growth potential. But mere cutbacks in an economy like Greece’s promote recession. Greece must adjust by introducing genuine reforms. But at the same time, going back to Dr Blanchard’s answer, the institutions need to adjust their definition of growth-enhancing reforms – to acknowledge that parametric cuts and tax hikes are not reforms and that, at least in the case of Greece, they have undermined growth...(edit) (YV

(edit) ...Our proposal on this front is simple, efficient and mutually beneficial. We propose no new monies, not one fresh euro, for our state. Imagine the following three-part agreement to be announced in the next few days...."  (edit)  (YV)   View original blog post 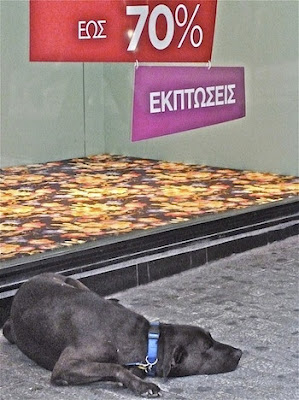 I found this photograph just now on The Guardian site. 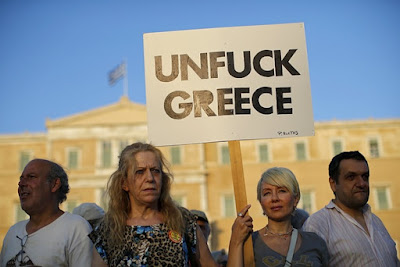 Varoufakis: No time for games in Europe!

It is so important when reading about the Greece crisis from afar to be aware of the media manipulation on this topic which has been immense.  Varoufakis explains.

Varoufakis: No time for games in Europe!
http://www.nytimes.com/2015/02/17/opinion/yanis-varoufakis-no-time-for-games-in-europe.html?_r=1 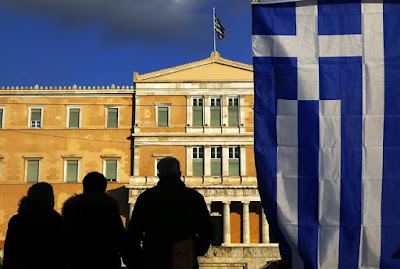 I saw a very thought provoking film at my professional development day at William Paterson University last week. I also met and spoke with the the parents/filmmakers. This film is not without its issues, but I feel it is a MUST SEE!

American Promise
"A DOCUMENTARY 13 YEARS IN THE MAKING, AMERICAN PROMISE PROVIDES A RARE LOOK INTO THE LIVES OF TWO MIDDLE CLASS BLACK FAMILIES AS THEY NAVIGATE THE UPS AND DOWN OF PARENTING AND EDUCATING THEIR SONS."
http://www.americanpromise.org/#/intro
at June 01, 2015