I am very proud to be part of the following 'his/herstory:  the Ten Year Anniversary of the Democracy Wall in Carroll Gardens'
Triada Samaras, Artist/Activist 2017

Suffice it to say, for the sake of brevity:
If you have an urge to fight the powers that be in your own circumstances or situation, JUST DO IT!  Even if you do not get the precise result you hoped for, you WILL get results! And you will never ever regret finding your own voice and your own courage in your own community!
CORD Co-Founders, Rita Miller, Lucy DeCarlo, Triada Samaras 2017

The "Democracy Wall"  is a story about a long-term, community and art activist project that happened in Carroll Gardens, Brooklyn. This tale is for the many artists and community activists who are out there in NYC (and elsewhere) right now fighting major battles in their communities. I want to tell you this:  Stay the course! 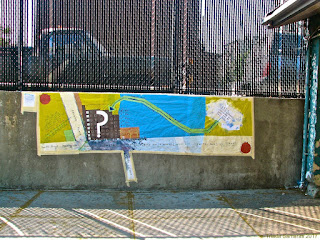 I am an artist and I have lived in Brooklyn all my adult life.  One day in May, 2007, in Carroll Gardens, Brooklyn, where I live, I was launched into artist activism quite spontaneously. So were my neighbors.  Like them, I had no idea what to do when a serious land-use and zoning issue arose in our community.   We were angry but felt powerless.  After several meetings on each other's stoops, three of us: Lucy DeCarlo, Rita Miller, and myself decided to co-found an all-volunteer community coalition:
CG CORD/Carroll Gardens Coalition for Respectful Development with ART as one of its primary communication vehicles.
In other words, we decided to fight the powers that be in NY. We did not have previous experience; our guide was passion for our cause.  We placed the Margaret Mead quote:  "Never doubt that a small group of thoughtful, committed citizens can change the world. Indeed, it is the only thing that ever has." on our new CORD blog that I created (with no prior blogging experience) and plunged in.  Over the next many, many months we engaged in wide range of activist and art activist activities.
I will summarize a few of these activities below for the reader to get an idea of the type of activities involved in community and art activism.  While the entire story is too long for one page or even ten,  the story is documented in its chronological entirety starting here (scroll to the bottom of the page to begin).  I wish, here, to simply add to the ever-growing body of information now available to other would-be artist/activists who might need to know how to begin to engage with a civic or public issue.  I certainly would never presume nor pretend to be exhausting all the artist/activist actions and possibilities.  In fact, brainstorming is the creative and 'fun' part of art activism and should not be missed! Each issue is naturally different and thus each will require different approaches and methods.
Here are some of the art and art activist activities we engaged in to make our case, to inform the public, and to communicate with the 'powers that be':
First, we created a petition calling for a moratorium of all construction over 50'.  Honestly I must re-congratulate, for the ten thousandth time, my 'colleague' (CORD Co-Founder) Rita Miller on this absolutely winning idea. It was perfect!  And we made protest signs that we gave to people to place in their front gardens (see photograph below). Many people placed these signs in their front gardens and Carroll Gardens became a sea of hard-to-miss, yellow signs. 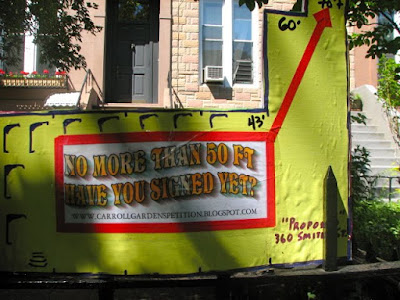 Simultaneously we launched what later became know as the "Democracy Wall." I placed the very first protest mural at the Carroll Gardens outdoor subway platform on 2nd Place and Smith Streets. (See image below)  Later in its evolution, the Democracy Wall became a Brooklyn News 12 item on television (See video below image or at: https://www.youtube.com/watch?v=QjFx-OlXT10 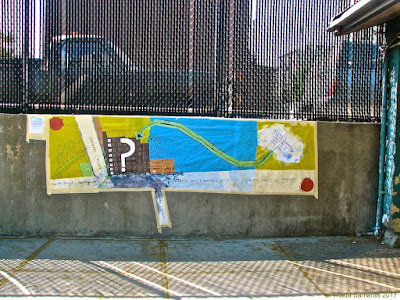 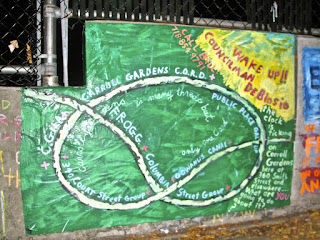 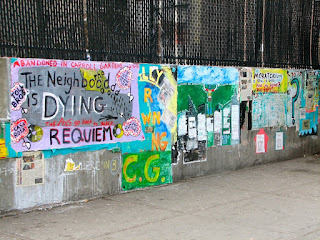 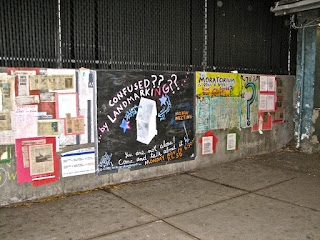 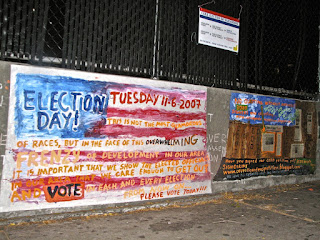 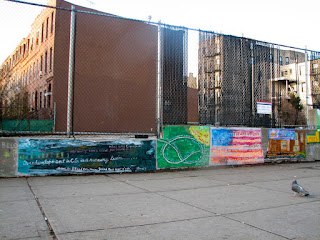